She Will Be The Sun My Universe Orbits 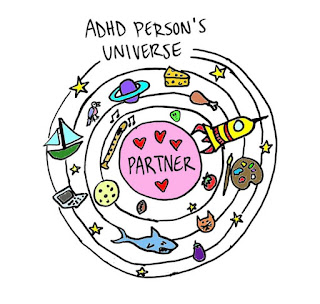 I saw this image about three days ago now, and I have not been able to move on from it since I first stumbled across it. I would say anyone who knows me, knows that my ADHD is a pretty defining quality of my personality, so it is not surprising that my relationship history would be impacted by this condition which I live with every day.
It was about two years and eleven months ago now that my ex-wife and I split. We had been having a lot of issues for a good two years before that, but the official split was about three years ago now. I emotionally dealt with the fall out of the relationship in the way any ADHD person would react, I hyperfocused on something else. Between theatre, the kids, and work there was a lot to hyperfocus on, and being that at the time I really did not believe that her complaints were justifiable reasons to end the marriage I for the most part felt there was no urgency to self reflect on how I would be a better partner in a future relationship.
Fast forward these past three years and a lot of my thinking on the subject has changed. I have come to believe that her complaints were absolutely justifiable, and that I will in the future sabotage future relationships in the same manner. Hence, the picture that has been on my mind for days now. That image could be the exact illustration of my perspective on my marriage. In my view she was always the center point of my life, and the ten thousand other things, were just bodies in orbit around that center. The image of my perspective is a solar system with her as the sun; her perspective of living with me looks more like the birth of a universe where I am the singularity with everything around me exploding in chaotic energy and being propelled outward.
Now after three years I have met a person worth investing new energy into. I have met a woman who is passionate about the arts, desires to be a positive force in the world, is a reader, a thinker, and someone who challenges me in our conversations. I have a met woman whom I adore. When she and I are in a room, she makes my heart pound. I genuinely enjoy being with her, and our conversations make me proud to be a person who would even be on her romantic radar. She makes me happy, and I want to be the person who she says makes her happy too. I am not inclined to romantic vulnerability, yet she is a bright light and I am the moth drawn to her risks be damned. From the time we have spent together so far I hope we blossom together. She is a firework and I want her to become my best friend and my romantic partner.
Yet, here I am, the same ADHD person I was in my marriage, and the same ADHD person I will be till they spread my ashes. I want a centerpoint again, but there will ALWAYS be 10,000 other things in that orbit too. I can no more stop the barrage of ideas to be considered, plans to be made, and problems to be solved than a flood wall can stop a hurricane. Being all over the place with my hands in a thousand pies is me, and the only real me I can be. I can no more stop being infatuated by a world of sparkly ideas and plans than I can stop breathing.
I have no silver lining for myself, no magic spell that will fix the problem that vexed my marriage. I will always be excited about the possibility of 10,000 potentialities; I ask myself every day, "Am I the seed of my own relational destruction?" I am left to self reflect on the nuts and bolts of never again letting the sun at the center feel like she is less than every reason the entire system orbits.
Posted by Kevin J Bowman at 7:38 PM

Players are given loads of time to make all selections, and simply hit, keep or double down by clicking on the options on the screen. Bets are all made digitally, so the game strikes rapidly with no actual chips involved. Thanks to this, 예스카지노 there are never going to be any missed or faulty payouts. You can walk away everytime you need and that lengthy ride from the casino is now just a brief walk out of your sofa to the kitchen.