Meandering About: Veganism and Tolstoy 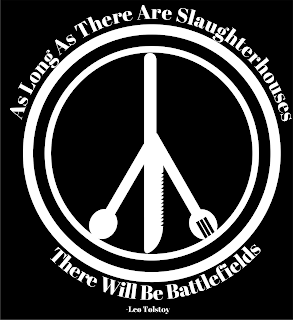 I am not a vegan, nor am I even a vegetarian. I try and keep my meat intake to a minimal level, but that is more based on a health decision rather than an animal rights motivation. I have heard arguments made by many people, and many faith traditions to support veganism and most of the fall very short, and even those I agree with in certain ideals I am not convinced enough to be motivated to stop the consumption of meat and other animal products.

I know there is a sect of believers within my own tradition of faith that believe a vegan diet is strongly endorsed in the Christian canon. Citing examples such as the diet given to Adam and Eve in the Garden of Eden, as well as the diet in the book of Daniel eaten by the 4 young men. These stories do not address the ethical questions involved in consumption of other animals and so have very little impact on my thinking, except to note that even ancient people had an understanding of the health benefits of veganism.

Hinduism supports veganism as an action which benefits one's Karma. As my views on sin within my tradition are considered heretical by many Christians, my views on Karma would be nearly identical to my views on sin. Sin is language to discuss that which destroys. Any behavior that brings destruction to ourselves, our relationships, or the world is therefore sin. In the same way, I would see Karma in a very similar way. This leads to the weakness I find in the Hindu argument is that they fail to convince me that meat eating is destructive to the world. I certainly would be motivated by their ideas on Karma to avoid meat which is attained by the factory farming system, since it's practices produce great ecological damage to the planet, and I believe emotional damage to the people who work in that degradative environment. I avoid factory farm meat for the same reasons I avoid pornography, because it's production dehumanizes the people involved in it's production, and therefore I am responsible for that act of violence. So I am still left as an "ethical" meat eater.

Now Krishna's teachings seem to have the wisdom that has most left me thinking on these matters. In their teachings I read a parable about a parent that had "normal" children and a child with severe mental disabilities. The parable asks the question of whether the loving parent would allow the intelligent child to consume the developmentally disabled child because their intelligences were viewed as unequal. This speaks me to as a parent and if I thought the parallel worked I would certainly become a vegan with no second look back. Although I do agree that ALL THINGS are the creation of loving God, I do not believe that since all things come from a common source of love, they are coequal in the eyes of that source. I "created" my children, and I created a vermicompost system with about 5000 worms in it. I LOVE my children, and I also LOVED my worms, and I lovingly ground up all their food in a blender before adding it to the food trays to aid their digestion. However, a day came when my worm bin got infested with maggots. I had tray upon tray of maggots. That day I dumped the worms bins, releasing the remaining worms back into the soil. Yet if one of my children came home covered in maggots, I would certainly do everything in my power to keep her alive. Now I love my children, and I love my vermicompost systems, but I love them in VERY different ways. So my philosophical ideas are challenged by the Krishna thought, but my lifestyle remains unaffected.

Currently my views on the consumption of animal products would be best described as compassionate and moderated, since I have seen nothing that convinces me to move past this idea. I however came by a quote today by my philosophical hero Leo Tolstoy, "As long as there are slaughterhouses there will be battlefields." This quote has me thinking again. Is the Buddhist that when we ingest meat we ingest the violence committed against the animal at slaughter the point Tolstoy is making here? Is he saying that a person who numbs his conscience by taking the life of another species is capabler of the same numbness toward the "other" of his own species? Is he agreeing with the Jains who believe in the "peaceful coexistence of all things," considering that as long as we accept violence in our existence in anyway, we will accept it in a plurality of ways? This point is made by the wonderful work of feminist theology in their discussions of the societal prevalence of kyriarchy.

I do not know what I think about the quote except to say that it has me thinking. I respect Tolstoy immensely, and will get to the source of the quote and try to understand more in it's intended context. Questions like these excite me; and I love both the intellectual challenge of considering them, but also the dialog of people from a perspective of ideas also. I call this blog "Dispossessed" because I always feel like a nomad in a world of cities, this is where I am wandering today.
Posted by Kevin J Bowman at 5:12 PM 4 comments: