I have an addiction. Every free moment of my time, and some extra that are not actually free, I am spending on Pinterest.  I heard of this site a while back, but it was not until the last several weeks that I was sent an invite from a friend and have started using it.  Now after this short time I find myself in the process of looking for an addiction support group.

Seriously though, it is an amazing site and I have had a blast seeing so much of what it has to offer.  With one exception.  I feel that a large percentage of the site's current active users are traditional "Stay At Home Moms" (SAHM).  This is not to say I have a problem with the SAHM decision.  Our family was blessed by my wife's decision to fill this role for ten years between the time our oldest was born until out youngest started school.  I believe that the SAHM or SAHD decision is a very personal decision to each family, and there are both obvious strengths and weaknesses to either or neither of these decisions.   My problem is the very traditional "gender roles" I see posted with great regularity by many of these SAHM members. 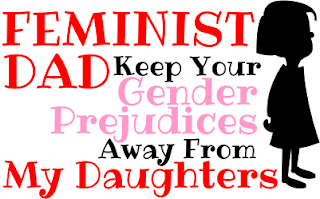 I am a father of two daughters, and although I supported the ideals of gender equality before becoming a dad.  I became a feminist in that delivery room when my wife gave birth to our oldest daughter.  I can not believe ANY MAN can look at his daughter and want anything less than everything the world has to offer for her.

I want daughters who have the strength of character of Rosa Parks; the commitment to justice of Dorothy Day;  the tenacity of purpose of Margaret Sanger; the outspoken voice of Elanor Roosevelt; and the commitment to the impoverished of Mother Teresa .

We need to raise a generation of girls who are not limited by the patriarchal prejudices of our civilization's history.  We need girls who will grow up to understand that beauty and femininity are not tied up in heirloom ideas and archaic bigotry.  I want to stand as part of a generation of fathers who treasure our daughters so deeply we offer up the stories of Marie Curie, Hariett Tubman, Virginia Woolf, Amelia Earhart, Jane Jacobs, Margret Thatcher, and Georgia O'Keefe as more inspirational than the fiction of Disney's Cinderella, Belle, and  Snow White.  We need daughters who would be more likely to call the police on a 200 year old obsessed stalker vampire than to maniacally adopt it as the greatest love story ever told. OK, perhaps the last sentence was a bit tongue in cheek.

I am a feminist dad and I plan on offering the world two daughters who are fiercely independent, driven, free thinking, investigative and see their femininity enhanced rather than diminished by these traits, and I know there are other dads out there working to do the same.

UPDATE: I saw this image and thought it  needed to be tagged onto the bottom, because the UP opening sequence is the kind of love story I want my daughters to see: Oh, my friend... the world needs more of you.
You have some very fortunate daughters. :)

There is a great kids book called, "Maria Tallchief: America's Prima Ballerina" about a Cherokee girl who dances on the international stage. My kids are also interested in other historical figures like Queen Elizabeth and Mary Queen of Scots.

Thanks for the post. Of course, our sons need this kind of edification and education as well! Here's to parents trying to raise kids.